Midges in the Snow

Fall came and went with one of the best color displays in recent years. Our rivers are still flowing well with blessing of last winter's precipitation, but we are happy to accept the “free refills” provided by the early season snow.  With the volatility in the current weather forecast, remember the warm Colorado sun always finds a way to shine and should bring strong hatches once it’s had a chance to raise the water’s temperature. In this week's report, we discuss our favorite flies imitating the hatches you can expect to encounter during these early winter fishing days. 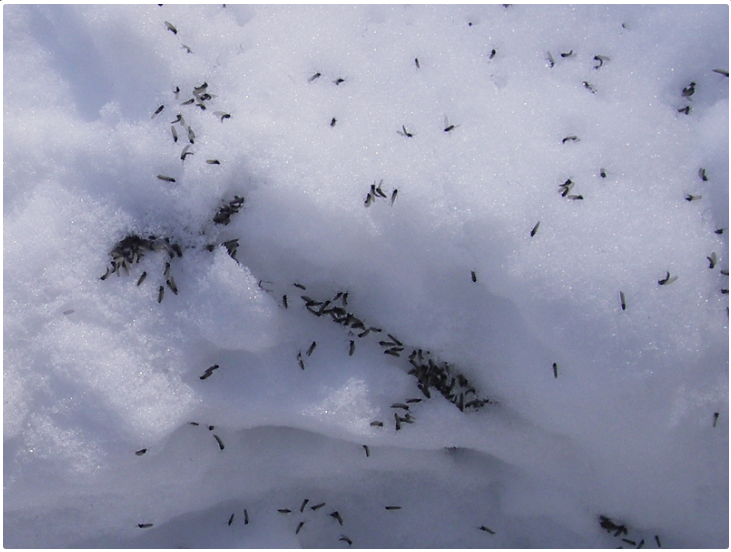 Midges are present in most Colorado lakes, ponds and rivers. One of the largest orders of aquatic insects (Diptera), midges are found in almost every climate on the planet, except deserts and frozen tundras. Although they can differ greatly in size, color, habitat, and behaviors, they all have a similar role in their particular ecological regions. Midges provide sustenance for all kinds of animals around the globe. Birds, frogs, fish and almost anything that lives near them, eat them. Many anglers dismiss fishing with midge patterns, some thinking that they or the trout cannot see the flies, others just not aware of their importance.  They should not be overlooked as they are a primary food source for Colorado trout all winter long. Midges are insects that have what is known as a complete life cycle. Meaning they have four unique life stages; egg, larva, pupa and adult. Here we’ll focus on some flies to imitate the larva, pupa and adult stages. 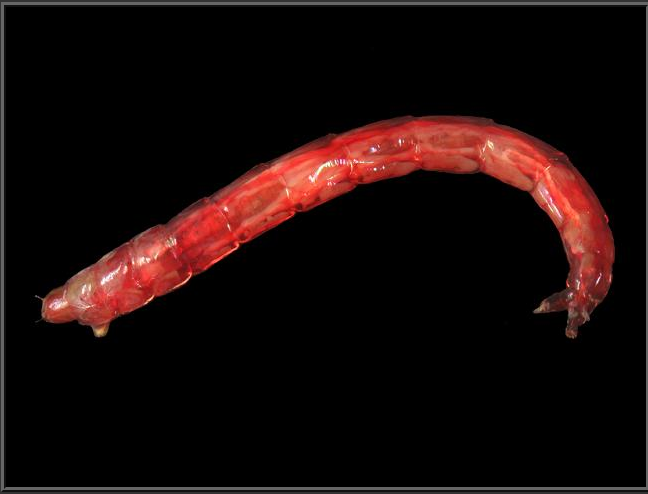 Available in many different colors and extremely easy to tie, the Pure Midge ranks as one of the giants in the world of tiny flies. With an almost endless variety of tying thread colors, hook styles and sizes available, you can customize this fly to copy any midge you’d encounter on the water. This fly will cover the larva stage and should be fished sub-surface with a larger fly or split shot above it to help it get down near the bottom. Midge larva will move around in the water looking for food as well as to avoid predators. The Pure Midge will most likely be effective before and during the onset of the hatch and not so much during. 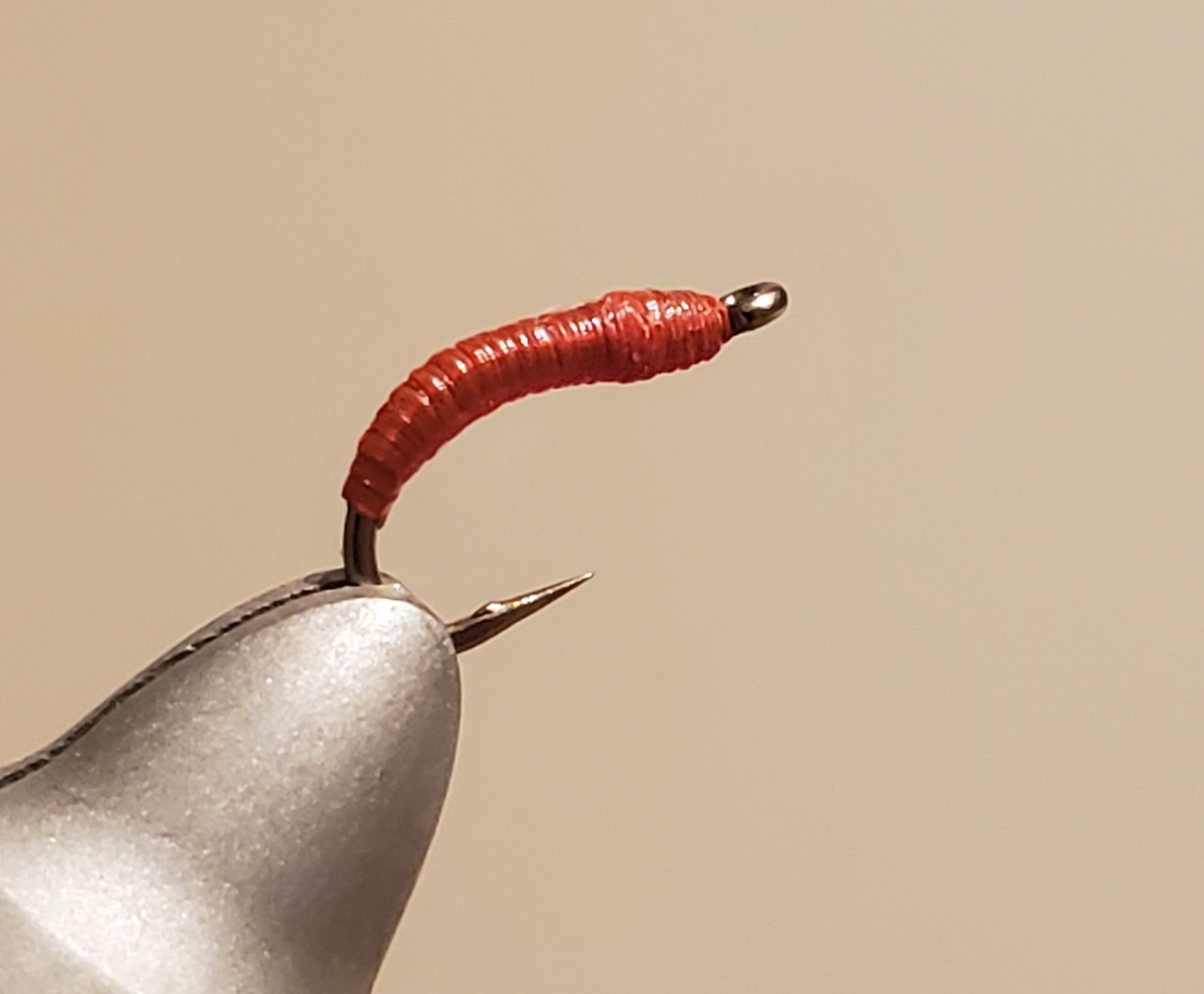 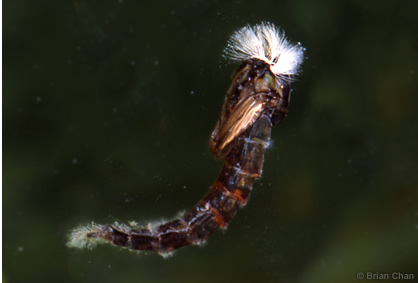 This fly adds a few more ingredients into the mix to move the simulation from the larva into the pupal stage.  The addition of a peacock herl thorax imitates the wing case splitting open as well as adding some sparkle to the fly. This “sparkle” looks like the air bubbles that often assist the insect during its rise to the surface. It also adds the white gill puff noticeable only in the pupa.  During this life stage the midge no longer requires food and it’s behavior and purpose changes from survival to reproduction. They release their grip on the bottom and float to the surface, making this the stage when they are most vulnerable. Not only are they susceptible during their journey, they often get “stuck” in the surface film, making them an easy target for hungry trout.  When fished sub-surface (nymphing) this fly will produce takes, but often will fish better when suspended in the middle of the water column and can be deadly when moved vertically as well as on the swing. This will replicate the movements of the hatching insects. You can also apply dry fly floatant to the white gill “puff” and fish the fly “stuck” in the surface film. 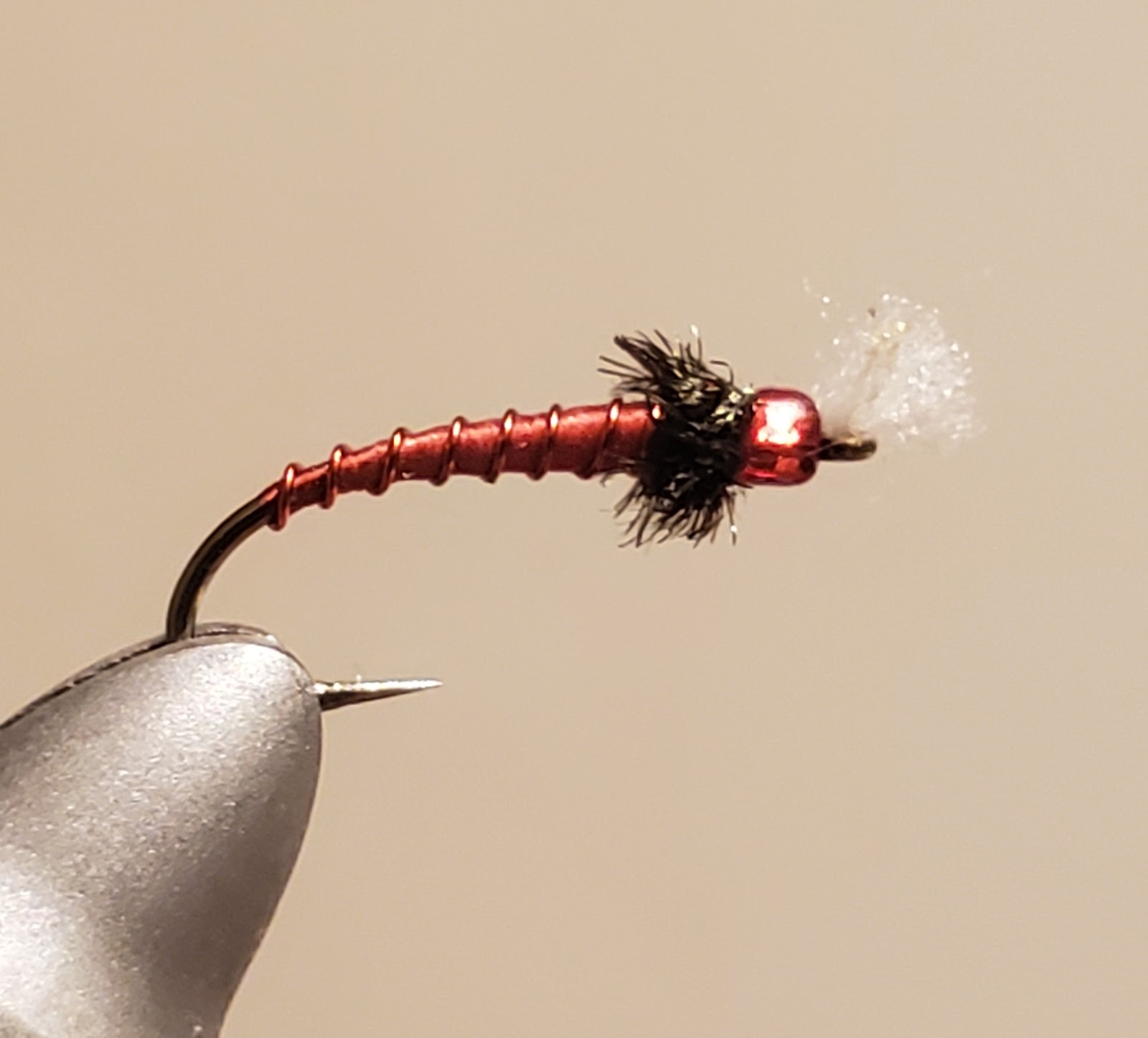 As our conversation moves toward the adult stage, our flies move toward the surface. This fly incorporates a small piece of foam tied into the fly at the thorax. This not only reflects the bulbus wing case we see in the pupa stage, but also causes the fly to float. When fished sub-surface the fly will naturally rise during the drift mimicking the behavior of the naturals. Switch to dry fly presentation, add some Loon Aquel, and cast it to those fish you see feeding near the surface. One important thing to remember here, if the fish are rising and feeding but you don’t see any air bubbles, they are feeding just under the surface and an emerger pattern should be the first thing you reach for in your box. 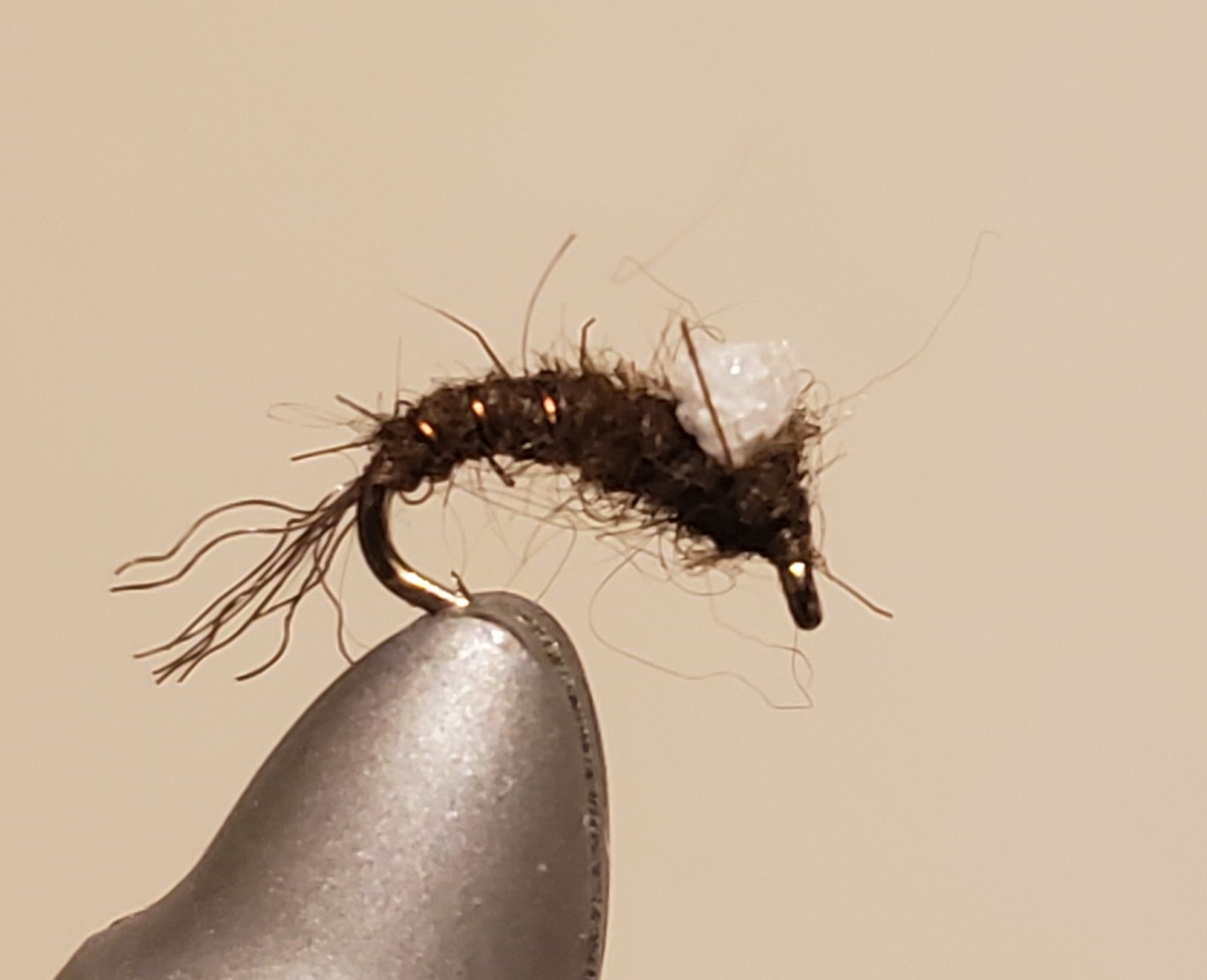 As the midge reaches maturity, the physical differences between the different species of midge begin to disappear.  While some larva may be red, white, green or even clear, eventually they all mature into black winged adults.  You’ll notice that most adult midge patterns are black only. Originally created by George Griffith, one of the co-founders of Trout Unlimited, the Griffith Gnat can be fished as a mating midge cluster or as a single midge in it’s smaller varieties. Although it is often overlooked by winter anglers, the Griffith Gnat will produce takes during a midge hatch when other “fancier” flies fail to turn heads.  Coat it with dry fly floatant and fish on a fine tippet 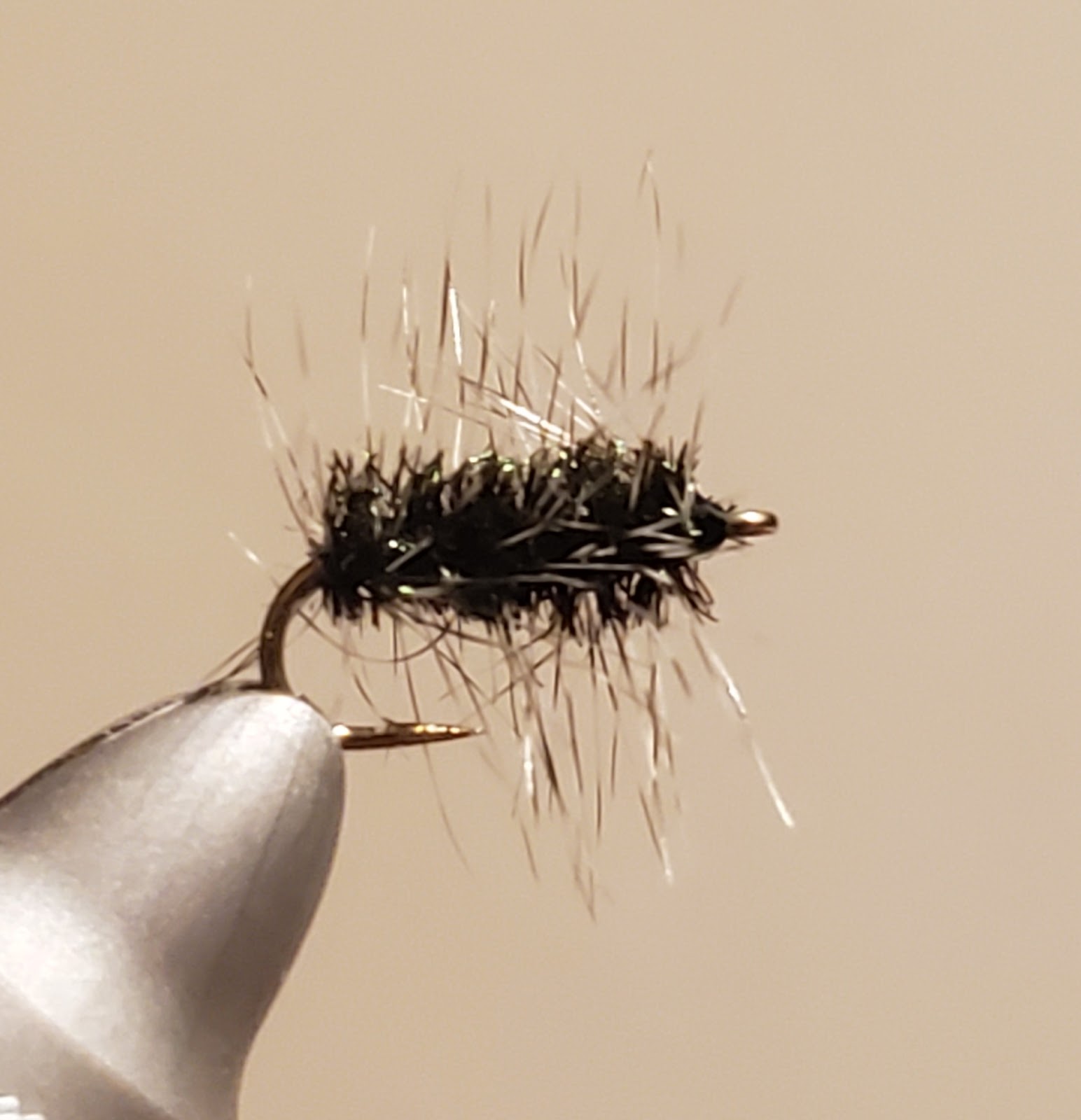 Warming Water and What to Do...

Catching the Hatch with Davis Murane

Fishing Outlook for May

Gearing Up For Runoff

An Approach to Fishing New Water

A Sight Fishing Story with Kory

Hunters and Anglers for The CORE Act

Bugs in The Blue: An overview of aquatic life in the Blue River and Dillon Reservoir

IT PAYS TO GET LUCKY: A VENICE REDFISH EXPERIENCE

Your voice is needed to STOP THE RINCON MINE.

Learning the ways of Lutz

Catching up with Kory Lewis on the Blue River

How I Hit the Fly Shop Lottery

Tuesday Ties: The Hare and Copper with Trent Jones

A May Fishing Outlook from Reed Ryan

The Speed of Flow

How to Choose the Right Winter Fishing Glove

Midges in the Snow

How to Improve Your Cast With Greg Hardy

Reading the Water with Blake Montey

The Pheasant Tail, By Jacob Lutz

A Guide to Streamer Fishing - by Nick Freeman

Primetime in the Rockies - By Nick Freeman

Spring Runoff and Blown out Rivers

Bucket List Trip: Golden Dorado on the Fly in Argentina

How To Fly Fish - by Nick Freeman

Get Ready for 2018 Spring Guide School

About the Author - Nick Freeman

Fishing the Upper Colorado with Pammy!

What Fishing Net is Right for You?

A day on the water with Tor and Shamus

"Pattern" Your Way to More Fish

Search and Rescue Surcharge: What Does It Cover?

The Best Fishing of the Year

Which Rod is Right for You?

Learn How to Fly Fish

Warming Water and What to Do...

"Many men go fishing all of their lives without knowing that it is not fish they are after."

"Brandon was an excellent fishing guide and did a great job coaching my son Ian on fly fishing technique."

"The charm of fishing is that it is the pursuit of what is elusive but attainable, a perpetual series of occasions of hope."

"Can't say enough about how you and your very helpful staff made our trout fishing visit to Silverthorne one of the best trips I've ever taken."

You can't buy happiness but you can buy a fishing pole, and that's pretty much the same thing.